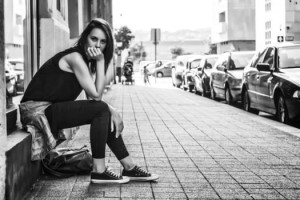 It’s hard as you move on to different stages of your life and different cities to keep friends and make new friends. And at one point I thought…okay I have my few good friends. That is enough.  But what I have found in my late 30s and early 40s that new friends find you. People come into your life. But you have to make yourself open and available as it is harder to meet people. I’m not interested in making fifty new friends to keep one. It’s different. In my twenties I wanted to be friends with everyone. I was so concerned about what everybody else was doing that I wasn’t looking at myself.

I constantly was thinking, “What am I missing? Who is doing what that I’m not at?” Now I don’t feel like I have to be involved in things. And there are more things I don’t care about. So I would say…you’re not missing anything. So maybe you’re missing getting drunk at the bar… but in the grand scheme of things you’re not really left out. I has this nagging voice in my head saying, “If I don’t go, they might not invite me the next time so I’d better go to everything so I can make sure I can do everything and see everything.” It was fun for a while but it’s easy to burn out on that.

I was just a player in this big group. I don’t think it would make a good reality show! But there was a sense that you were part of this group and part of what was going on. I wasn’t making my own decisions. You end up not knowing what makes you happy. You don’t know if it’s what you really want to do. You don’t try enough new things to know what is important to you. It’s a very general statement but something to be watchful of in your twenties. I have no regrets, but if I went back and could do it again I don’t know that I would. I would do pieces of it for sure. Being part of those experiences is what helps you become who you are, but I wish I had travelled more. I wish I moved somewhere else at least for a while. I’ve been in Chicago forever. I had all these grand ideas but I never followed through on those grand ideas I had for myself when I was younger. I don’t know if I thought it wasn’t attainable or it was too hard. It think it was that I’d rather not try and fail and disappoint myself and my family. I have had a full life but that is something I would do differently.