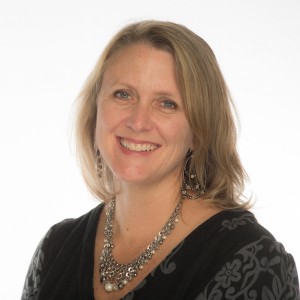 We got her just in time. A month shy of her 50th birthday, Trina Barlow shares her advice for 20-somethings from her 40-something perspective.

Trina, president of Overflow Communications, a multimedia communications firm she runs alongside her husband, started her career as a temp at an advertising agency after her short-lived career as a zookeeper (more on this later…) didn’t pan out the way she imagined it.

Trina entered college as a marine biology major, but after being told by a counselor that she would likely end up in a lab instead of working directly with animals, she chose her second love, reading and writing, and became an English major with a business minor because she knew “a liberal arts background and a business minor could get [her] somewhere.”

At the end of her junior year of college, Trina married her high school sweetheart and followed him to Florida as he began his career in the Navy. Her desire to work with animals moved with them.

“I figured that with all my gusto, I could walk into the zoo, be a zookeeper for a couple weeks, and [then] basically be the zoo director,” she said. “I quickly realized that wasn’t the case.”

So Trina worked with leopards, monkeys, bears, and a tiger named “Master” for a few weeks before she decided to apply for jobs at a temp agency. And while she still wasn’t sure what she wanted to do, her experience at various temp jobs helped her realize what she didn’t want to do.

“I thought maybe I would take over one of the high-rise banks, but being a temp allowed me to see there’s no way [I would do that],” she said.

Her temporary job as a receptionist at an ad agency was where everything changed.

“One of the executive directors, a woman, noticed…I was reading…this huge anthology of Langston Hughes…,” she recounts. “Somehow that made me stand out.”

Trina was promoted to an entry-level job as a traffic manager and worked her way up in some “very male-dominated segments,” leading her to a job in Dallas.

When she was in her late twenties, Trina had her first baby—and moved to San Diego two weeks later.

“I was literally the typical first-time mom,” she said. “I’m staring at the baby, taking a million pictures of her…what else do I have to do?”

Trina said her former employer tried to continue working with her, but sans Internet, they realized pretty quickly that the arrangement wouldn’t work. So Trina temporarily left her career in advertising to raise her kids, which had been her and her husband’s plan all along.

On taking a break from her full-time career to raise kids, Trina said, “[I] loved it, but also did not know what to do with myself. [I] made schedules…tried everything, and then eventually, f[e]ll into a rhythm.”

But her career didn’t end when she entered motherhood.

“If you’ve already been in a career, it continues when you’re having kids,” she said. “You just do it in a different way.”

As she did as a 20-something temp, Trina began exploring her options, but this time as a volunteer.

“I had forgotten what I liked anymore,” she said.

Her quest led her to creating Open Arms, a company that employs refugee women at a living wage, with friends who were other past executives like herself—and all women. Once Open Arms merged with a nonprofit organization and her kids were mostly grown, Trina took over Overflow Communications full-time alongside her husband where she still works today. 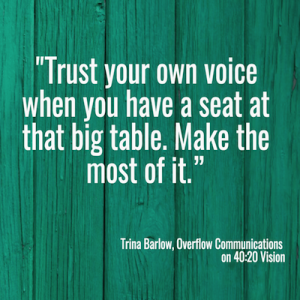 Looking back on life in her 20s, Trina said she remembers working with a lot of great women who were in their 40s with kids. She thought they knew everything, but the truth is, they didn’t.

“I’d listen to them and go ‘Wow! I don’t know how you’re doing all that!’” she said. But now as a 40-something, she says, “You’re still trying to make it up as you go along… I know they didn’t [know everything] because I don’t.”

With daughters in their 20s, Trina said she loves watching their “enthusiastic optimism and passionate purpose” about life.

She urges 20-somethings to continue to be authentic to who they are.

“You spend a lot of time watching other women and trying to be like them,” she said. “Follow your instincts… Don’t try to be like that other woman executive down [on the other end] of the table.”

As she approaches her 50th birthday, Trina says life is moving fast, and she still has to remind herself to trust her own voice, just as she urges 20-somethings to do.

“Trust your own voice when you have a seat at that big table,” she said. “Make the most of it.”