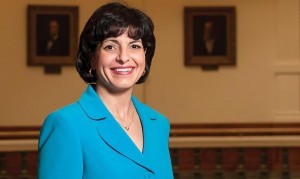 Today’s interview with Christi Craddick, the only woman on the three-member Texas Railroad Commission, taps into the uncertainty many women feel in their twenties…what do I want to be when I gorw up (and aren’t I supposed to know by now!)? She shares the journey to finding her path…and  five things she learned along the way.

“My 20s were interesting because I got into law school and realized I wasn’t enthralled [with it, but I still] wanted the degree,” she said.

Not passionate about becoming a lawyer, Christi spent her time in law school figuring out what she wanted to be “when she grew up”. She considered herself a generalist, finding many things interesting rather than having a specific focus. She did discover she enjoyed aspects of oil and gas, environmental and administrative law—three subjects she touches on regularly as the only female member of the three-member railroad commission.

Out of the angst came vision. Christi’s first few years after graduating law school put her on a new path.

Christi graduated from law school at 25 and spent a year and a half working for various law firms and groups around the Texas Capital. Hoping for some insight into what she wanted to do, the only thing she learned in that respect was that a large law firm wasn’t for her. So when she got a phone call asking her to do some issue-based project work, she jumped at the chance – even though she didn’t have any clue how she was going to do it. From there on out she would work for anyone who would take a chance at hiring her and ended up setting up her own law firm. She says of being self-employed:

“If you aren’t out hustling and doing your job well then you don’t eat, and you can’t live the quality of life you’d like to. I didn’t realize it was a big deal at the time, but it was.”

After spending time working on her own and honing her skill set, Christi found herself working back in the political realm. By her 30s she was running campaigns and fundraising for candidates. This set her up to run for office herself in her 40s.

“You don’t know what’s coming next,” she said. “Sometimes 20 year olds think [they’re going to go from] answering phones to being the CEO, and they forget there’s a lot in between. No job is too small because there’s something you will learn. You will look back and realize there’s some value to what you did.”

Looking back on what wished she knew in her twenties, Christi shared five lessons learned to help reduce the angst:

“I think women hold themselves back as much as they get held back. You have to figure out how to sell yourself and take that leap.”

“Long-term, [the thing] that I would do better is maintain relationships, even if it’s just dropping a Christmas card [in the mail] or [sending someone] an email occasionally.”

“There are a lot of people who are willing to help you if you ask them.”

Christi Craddick is a Midland, Texas native and a graduate of The University of Texas at Austin. Christi resides in Austin with her daughter, Catherine. https://www.christicraddick.com/

You can find 40:20 Vision Ambassador Danielle Trevino on Twitter @daniellettx