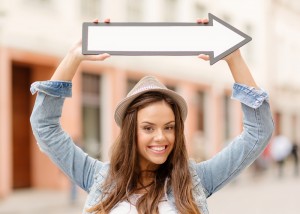 Three fulfilled career woman share their what I wish I knew then moment on finding their path in their twenties.

Resist the path of least resistance. Stand your ground on what you don’t want to do

After college I remember worrying that I should know what I want to do. I wanted to have a career. I knew that and I knew that I did not want to be a lawyer because everybody who didn’t know what to do seemed to apply to law school.

In the end I know I was really supported by my parents. I think they would’ve preferred that I go to law school but when I made it clear that I didn’t want to, they said “All right then don’t go to law school. You’re only 22, you don’t have to have it figured out.” That was really nice. I think that I heard that as “but it would be nice if you could” but I don’t think they meant it that way. – 40-something, LA

You have to figure out what’s important.

o If you’re doing something that you want to do or on the path to doing that, you have to work harder than anybody else. You need to establish yourself where you are and make it your priority. It shouldn’t just be a summer job mentality. – 40-something, Chicago.

Getting the job that you want, that you may not be “qualified for” is about having balls, determination, believing you are qualified and proving it.

I graduated from school with a degree in Psychology and I became the marketing director of one of our regional malls. I never took marketing class in my entire life and I never had a job before and it was a giant job. I knew that I got it because I had the balls to go interview for it. I pushed hard to get it. And I took a pay cut from the person before me because I had no experience.  I had no business getting the job. I felt good about that.

I just felt like I could do it and if they would see that I could do it, which I could prove to them, I felt qualified yeah. I felt like I’m going to prove that I can do it and I had some sort of determination. – 40-something, Detroit