Today we have guest post by Stephanie Florence, 40:20 Vision’s contributing / Millennial editor, talking about leaving New York. And because one post wasn’t enough, read what she’ll remember most about NYC here.

It’s time. It came unexpectedly and much sooner than many people believed it would. (Me, included.) I thought long and hard about this decision – was I ready to leave? What would leaving mean? Does it mean I can’t cut it in a city like New York? Or that I’ve accomplished 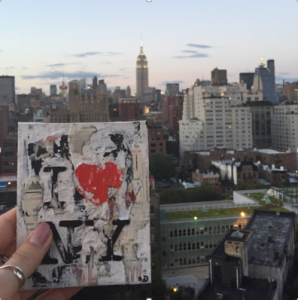 all that I came to do?

I made the decision to move to Chicago and the ultimate question I’m considering is how am I only feeling excitement and no regret? Simply put, I’ve got to see for myself all the good that’s happening in Chicago. While I can’t predict exactly what this move will mean for me, I know that it’s the right one for me. I came to this city in pursuit – of new experiences, new challenges, new perspective. I acquired all of that and much, much more. I’m leaving New York still the same person that arrived 3.5 years ago, but these days I’m living a more informed life.

I did a lot in the last few days and most importantly, learned about leaving a city with no regret:

Host a goodbye party that gives you energy and memories. With countless restaurants, bars and rooftops all over New York, I had plenty of options for a going away shindig, but none of that felt right. Rather than gain calories with food and drinks, I wanted to burn them in an environment I have come to love these last few years. Fitness has become a big part of my life during my time in New York and a private party with 305 Fitness was the only option in my mind. So I did just that. Not only has founder Sadie 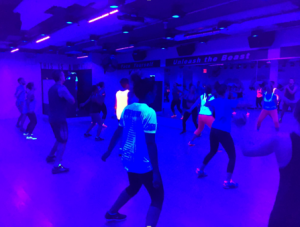 Kurzban created a community that supports and challenges everyone who walks through their doors, she gives back too. 305 Fitness hosts donation-based classes with proceeds going to She’s the First. I knew one person when I moved to this city and I was so moved to be in a studio filled with the people that have made my New York experience what it was. That night, I walked to my apartment on an endorphins-fueled cloud sharing my excitement with family.

Surround yourself with people that matter. People and causes you want to stay with you after you go. I was asked several times how I was going to spend my last weekend in New York and my answer was simple – with the non-profit I volunteer with. She’s the First hosted their fourth-annual Campus Leadership Summit where high school and college students meet in New York. I heard from a woman who works with one of the most monumental voices of our generation, Malala, and another woman who has been on the front lines of positively impacting education globally. I watched one friend talk about all the good her company is creating and I watched another friend shine as a speaker in a room full of recent graduates. I connected with like-minded individuals and was reminded all over again why I’m so passionate about them and their support of girls’ education.

Keep your expectations in check. Many people charge through a bucket list before they leave a city, but I knew that would only create a sense of anxiety during my final days. I enjoyed rooftops and good conversation. I tried to see as many friends as I could and agreed to as many outings possible that I was invited to.

Book your first trip back before your one-way flight takes off. I didn’t help my friend Carrie land a sponsor for her fashion show and think, “I’ll catch the live stream.” I booked that plane ticket because I am so proud of my friend and the movement she has created. And I know sitting front row at a piece of history is an experience I need to have again (and again and again). This trip also assures me that nothing is forever. While I’m moving out of 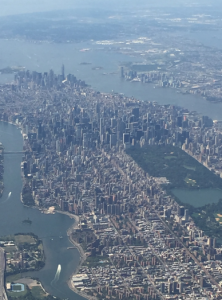 my apartment in New York, it doesn’t mean I’m ready to leave behind the pure joy this city brings me. New York is forever a part of me – and I’m allowed to remain attached to it, regardless of my current zip code.

I’ve made the most of my time, and then some. I gathered the experiences, challenges and perspective I was seeking. And when I saw myself easing into a new comfort zone of sorts, I did not allow myself permission to stay. I made the scary decision to make a move – not knowing if I was completely done with New York, but understanding that it will always be here for me.

Here’s what I have to share: While the big jumps are the most intimidating, they will ultimately become the most rewarding. Be prepared to get uncomfortable with not knowing everything or what’s to come next. Jump into your next chapter with everything you have. You will not be disappointed. 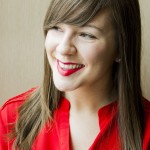 Stephanie Florence is a 20-something who can talk to a brick wall and dance to a kazoo. She contributes to the 40:20 Vision as the Millennial editor and on every day that ends in “y” you can find Stephanie meeting people, telling exceedingly long stories and taking the approach of a student…always. Find her dancing around Chicago (!!!) in her personalized Chuck Taylors, complete with her Twitter handle: @StephanieFlo.