Today we have a post from Stephanie Florence, 40:20 Vision’s contributing / Millennial editor, reflecting on her two years living in New York.

Two years ago this month I boarded a plane to New York City. I had two suitcases and would sleep on an air mattress in the living room of my new apartment that I would share with a roommate I had never met in person. I would start my new job the following day at a company with 600+ people in New York and thousands on staff around the globe (after leaving my first company of 16 employees). I could count the number of people I knew in New York 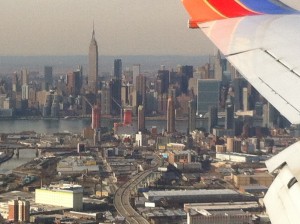 on one hand and the majority was thanks to the power of social media. I didn’t know what I was getting myself into – just that I knew I had to try.

A moment of panic struck as I looked at my one-way ticket so I called my parents for reassurance. As a girl who got homesick living two hours south of Chicago for college, I started to question if I really could leave my safety net. My parents talked of my enthusiasm and spunk as a child and how something had happened over the previous months causing me to lose my spark. They hoped that spark would ignite as I opened my New York chapter.

It’s safe to say I’ve shined brighter than I ever knew possible since making the move. Thank you to my family and friends for your constant support of my leap. Thank you to the visitors who have made the trek to see my new digs and for the friends that always make the effort to see me during my trips home. Thank you to the rockstars I’ve met in New York who remind me daily we made the right choice.

Here are a few of the experiences I’ve had since taking the leap:

I embraced my life path. While many around me got engaged and married I didn’t let my insecurities get the best of me. Instead I toasted their futures and considered all the possibilities of mine.

I forgot what it means to be homesick. Without a doubt, I miss my family and friends, but those feelings of sadness don’t consume me like I had anticipated. I look forward to my trips to Chicago, but live in the moment every day in New York.

I saw what it means to find the one. My siblings were married six weeks apart this past year. My parents celebrated 36 years of marriage and my aunt and uncle reached 50. I attended the wedding of one of my oldest friends and will be in the wedding of another best friend in a few weeks. I consistently saw true love in its realest form in front of my eyes. I feel grateful, as a single 20-something, to have so many wonderful examples to aspire to become.

I realized it is in fact possible to date in NYC. I racked up another date. (That’s two since moving to New York, for anyone counting.) Homeboy didn’t pan out, but the actual existence of said date assured me I can meet guys in person in this crazy city and dating isn’t so bad after all.

I said yes to all opportunities. A few months ago an MTV casting producer reached out through my about.me page about a show she was beginning to cast. I learned the show was tentatively called “NYC Girls” and would focus on 20-somethings making it in New York City. Initially, I wanted to confirm she had the right girl – I was making it? Says who? Next, I questioned what this would mean for my personal brand. I acknowledged the fact that I likely did not fight or party enough for a reality show, but the producer assured me they would focus on girls on the grind and how living in NYC is like no other place. So I went with it and created an audition video with the help of some stellar pals. Turns out I wasn’t a fit for the show (they’re probably not quite interested in the girl who looks forward to work on Monday morning), but the fact that I was recognized means I’m doing something right.

In the year to come, I’m going after more challenging work and looking to improve myself through more writing, more reading and more involvement with She’s the First. Oh, and I think I’ll commit to another date or two…and why not a half marathon while I’m at it? Wish me luck!