I went to the ranch because I was tired of going down Second Avenue.

That November morning felt the same as just about every Monday morning over the previous four years of my life. Up. Make bed. Shower. Find something to wear. Turn off lights. Check again for keys, wallet, bus pass, cell phone. Question need for scarf or umbrella. Decide against both. Grab the laundry bag on the floor of the closet.

“Good morning…you pick it up tonight?” from the sweet lady at the laundry.

“Yes, if I can make it home before you close. Otherwise, I’ll see you tomorrow.” She always said good-bye as I walked back out the door and waved to her husband, who was already busy pressing oxford shirts on a frayed ironing board by 7:30 am.

I waited on the corner of 79th and Second for the M15 Limited. The usual small crowd gathered outside the synagogue on the corner, avoiding eye contact, staring straight ahead at the space where a bus would eventually appear. I spent the time watching people enter and exit the deli across the street. They had their own morning routines. Coffee. Cigarettes. Maybe just The Post, and the quarter on the counter. Some of them crossed the street to wait for the bus, and others headed to another bus or train that marked the beginning of their own weeks.

I came to recognize the other bus-riders: the skinny smoker who came to the bus stop with wet hair even in the winter; the lady with the gold purse and burgundy coat who cut the line and pretended not to know or see fifteen other people waiting, too. I knew if I went in to the office later than usual, I might see the attorney in the wheel chair waiting to get on using the lift through the back door. I knew which bus driver helped him on first, when the other drivers let him wait while the crowd entered through the front door.

There was a rhythm to my days and to the bus ride each morning. For several years, I took comfort in the pattern, but over time, I began to feel suffocated. The ease and comfort of routine crept up on me, and the slow spread of tedium convinced me that something had to change.

I got on the bus that November Monday and dipped my fare card with the usual “Good morning,” to the driver’s silent profile. I only received a “good morning” back about once a week but I didn’t let that deter me from trying to be polite. I headed to the back where I typically could find an empty seat or two.

Somewhere near 59th and Second, I watched as the gondola came over from Roosevelt Island, carrying yet more people who were starting into the week. I realized I was jealous of them, jealous that they were suspended above the whir of the city, momentarily cocooned by silence and surrounded by space on all sides. As I looked up at them through the bus window fogged by too many bodies and fought off the overflow of newspapers, purses and coats, something finally hit me. I needed to find some space.

Many people attributed my decision to leave New York and go to Wyoming to some kind of nervous breakdown, some radical departure from responsible living. It wasn’t that at all, at least that wasn’t the catalyst for going to the ranch. I simply wanted a change, a chance to leave the corner bus stop behind. And somehow, even as I feared the idea of leaving, it comforted me to know that that the girl with the wet hair would still be there whether she saw me or not – that every day, somebody else would take my seat in the back of the bus. 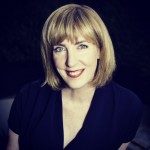 Sarah is a 40-something CMO, wanna-be writer who still has more questions than answers. She thinks mean people suck and believes in the power of wine and laughter. NYC.