I’m truly inspired by today’s guest post about a 20-something’s transition to the real world and story of how she learned a lot more than discipline and tips on how to run a marathon along the way.

Erin Leigh is running a marathon on Sunday. She’s running on behalf of She’s The First, an organization that sponsors girls’ education in the developing world, helping them be the first in their families to graduate, ultimately fighting poverty and creating new futures.  While many 20-something’s attention will be turned to marathon celebrations of St. Paddy’s Day this Sunday, Erin and her running partner Brooke will be running for the girls. Each dollar of the money they raise  for running this marathon goes directly to funding a girl’s education.

Enjoy their story. If you are like me you will be motivated to take your own action and donate. Funding one mile sponsors one year of education. And every little bit adds up to a mile! They are currently funding 28 women. Let’s see if we can get them out of the twenties!!!

When I signed up for the big 26.2 back in October 2012 I had been mulling the decision over for about four years.  I learned early on in my career that life is not a sprint, it’s a marathon. But this lesson was harder than I thought to implement.

The transition from college to real life in 2008 as a recent grad and 20-something was a wake up call for me. Life outside of class and all-nighters was one of discipline, consistency and regular bedtimes. Working a day job required 8-9 hours of sustained activity, and things like self-control, longevity and punctuality didn’t come naturally to me. I could sprint through finals on 2 hours of sleep and 6 cups of coffee. But go to bed at a decent hour so I could stay awake at work for 8 hours? That was a different story.

How was I going to adjust to this new reality? What better way than to actually run a marathon. People sign up for marathons for a variety of reasons. It’s a “bucket list” item. A nice-to-have. A notch in their belt and big life marker.

The unfortunate thing about this was that I wasn’t sure how I would I learn the daily discipline of marathon training.

The nagging was always in the back of my head. “Maybe this is the year.” “Perhaps now is the time.” But something was missing. This needed to be bigger than just me, because it looked like I had 26.2 impossible miles ahead of me. If this was going to happen, I needed a reason and I needed a tribe.

In March 2011, shortly after moving to NYC, I got connected to an organization called She’s the First through the power of social media. We sponsor girls in developing countries to go to school so they’ll be the first in their families to graduate.

That’s when I called Brooke. Brooke and I are friends from my wonderful days in Atlanta, where she currently lives. She is a runner who, as I would soon find out, had vowed to never run a marathon. Impossible! So many miles! Truth be told, she had a much better respect for the distance than I did. See above Re: She’s a runner.

After some convincing and coaxing and her own soul searching, she came around. And when I say that she decided to complete a marathon, I mean that she decided to attack a marathon. She charted her path, made a schedule, and didn’t miss a single training run. We’d send texts about long runs that were completed, cheering each other on from our different cities.

Other times we would Skype about the process and mostly I would moan and groan while she’d blame me for getting us into this mess. But then she’d remind us both why we were here; we chose to do this. Girls would be going to school because of this!

The race is this weekend. If I have any sadness in seeing an end to this, it might be the constant conversation Brooke and I have had. We had been “besties” for years, but the bond we’ve forged over this race proves that distance doesn’t matter in an age of technology for friends who are worth it.

A note about fundraising while training: you have to tell people you’re training if you want to raise funds.

Tell people? I mean, can’t I just go run and train in the peace and quiet of my neighborhood? I might fail. I might get injured. I might not want to do that 15 mile run. And what if we don’t raise all the money? What will we tell everyone? Did we set our goal too high?

Fundraising while training is really vulnerable. And vulnerability is awkward and uncomfortable and really, really scary. It is also wonderful. In sharing my story I have heard so many other stories of people being inspired, from learning about She’s the First, or the races they’ve done and pointers for me.

Through lots of dinner parties, prayers, Facebook updates, Instagrams, and even a TV Spot on CBS Atlanta, we have exceeded our fundraising goal and started funding the second year of school for the 26 girls in Nepal. More than 85 people have given generously and joined in on the journey. With every “Like” on Facebook and text message during a grueling long run, friends joined the tribe.

It takes courage to live your dreams out loud. It takes courage to be vulnerable…to face the impossible. But I can say that it is so worth it. When I cross that finish line this weekend as a big puddle of tears, 26.2 miles later and 28 girls sponsored, I won’t be alone.

What’s your marathon? Be sure to share it; you have no idea the lives you’ll change – including yours – in the process. 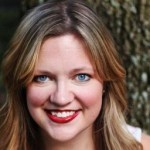 Erin Leigh lives in NYC as a social media marketer. She is proud to have grown up in the south where people know how to properly make sweet tea. She is completing her first marathon on March 17, 2013, in an effort to send girls to school in Nepal through She’s the First. You can find out more and donate here; 100% of the money raised will support girls in Nepal.  Erin Leigh also loves tweeting about brunch, so share your favorites with her: @ErinLeighNYC.