Today we have a post from Robbie Freeman, with his take on leaning in.

As a 26-year- old male marketing professional, I am probably not the first person Sheryl Sandberg expected would read her book, “Lean In.” But, I did read it, and now strongly encourage all guys like myself to grab a copy.

Before I go any further, I have to confess something: I’m kind of a fraud. My motives weren’t totally pure when I picked up Sheryl’s book. I wasn’t expecting to learn (which I did) how society grooms young women to be ashamed of their assertive personality traits, or how difficult it is to navigate your career while also planning for your future. No, I picked up this book in the hopes of impressing a girl who had mentioned how much she loved it.

I mention this not to show you how creepy guys can be (though it is an extra added benefit!) but to show that sometimes guys are listening. Right And now, I consider myself a bona-fide “Lean In” fan boy. I’ve heard Sheryl speak, I’ve attended “Lean In” inspired panels and I even attempted to create a new meme based on the book’s themes (sadly, to no avail…) 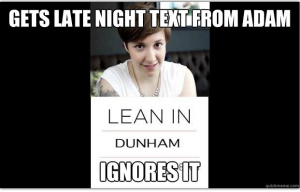 Why did I become such a “Lean In” believer? The book really enlightened me to the fact that everyone faces similar problems* and it provides sound career advice, irregardless of gender.

*You’d think this was obvious but seriously this was big.

At the end of the day, what 20-something isn’t…
• Struggling to strategize the best ways to advance their careers?
• Fearing they’ll be left standing without a chair in a game of mentorship musical chairs?
• Looking down the road 10 years, fearful that they won’t be able to have a work-life balance?

But, what really makes the book a must-read for young men is the attention it brings to the additional struggles young women face and how we can either contribute to the problem or be solution.

Just the other day, my friend of 10+ years made an uniformed comment about his own office, “You’ll see woman don’t really work here or get promoted. It’s [redacted sports team], what do woman know about sports?” My response “Are you fracking** kidding me? That is a ridiculous way to look at things.” It’s guys like this that I need to hear Sheryl’s message loud and clear.

That kind of ignorance isn’t exactly his fault It’s tough for me to pass judgment on him though as– I realized that I was predisposed to have a positive reaction to the book’s principles because of an experience not many guys have had. During my first post-college job, I worked for an excellent female manager in the male-dominated technology world. Four months before our signature event she alerted her boss and CMO that she was three-months pregnant with her third child. After confirming she could attend the event, they developed a plan to make sure that event went off without a hitch, while making sure the workload wasn’t too much to handle. When she returned from maternity leave and was uneasy about resuming 75-hour work weeks, they devised another plan to modify her position to part time. It was the great leadership from both her and her boss that led me to an understanding and appreciation for the themes addressed in this book.

I understand not every young man will have great real-life example to build on, but every 20-something dude can read the book and learn something about how to navigate and understand the workplace.

Oh and girls should read it too 😉

PS…
I bet you’re wondering what happened to that girl I was trying to impress by reading “Lean In.” Well, it didn’t go exactly how I hoped (we didn’t fall in love while discussing the book over a glass of wine), but we remain great friends and still discuss the issues brought up in the book on a regular basis. For instance, she knows not to get me started when incomes to these trendy “empowering” ad campaigns. I’ll save that rant for another time though. 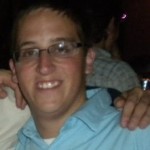 Robbie Freeman is a marketing professional by day and amateur improv comedian by night. He recently realized that he no longer hates sandwiches and merely dislikes them. You can follow him on Twitter at @Robbie_Freeman.